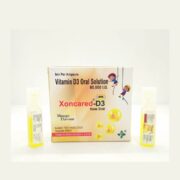 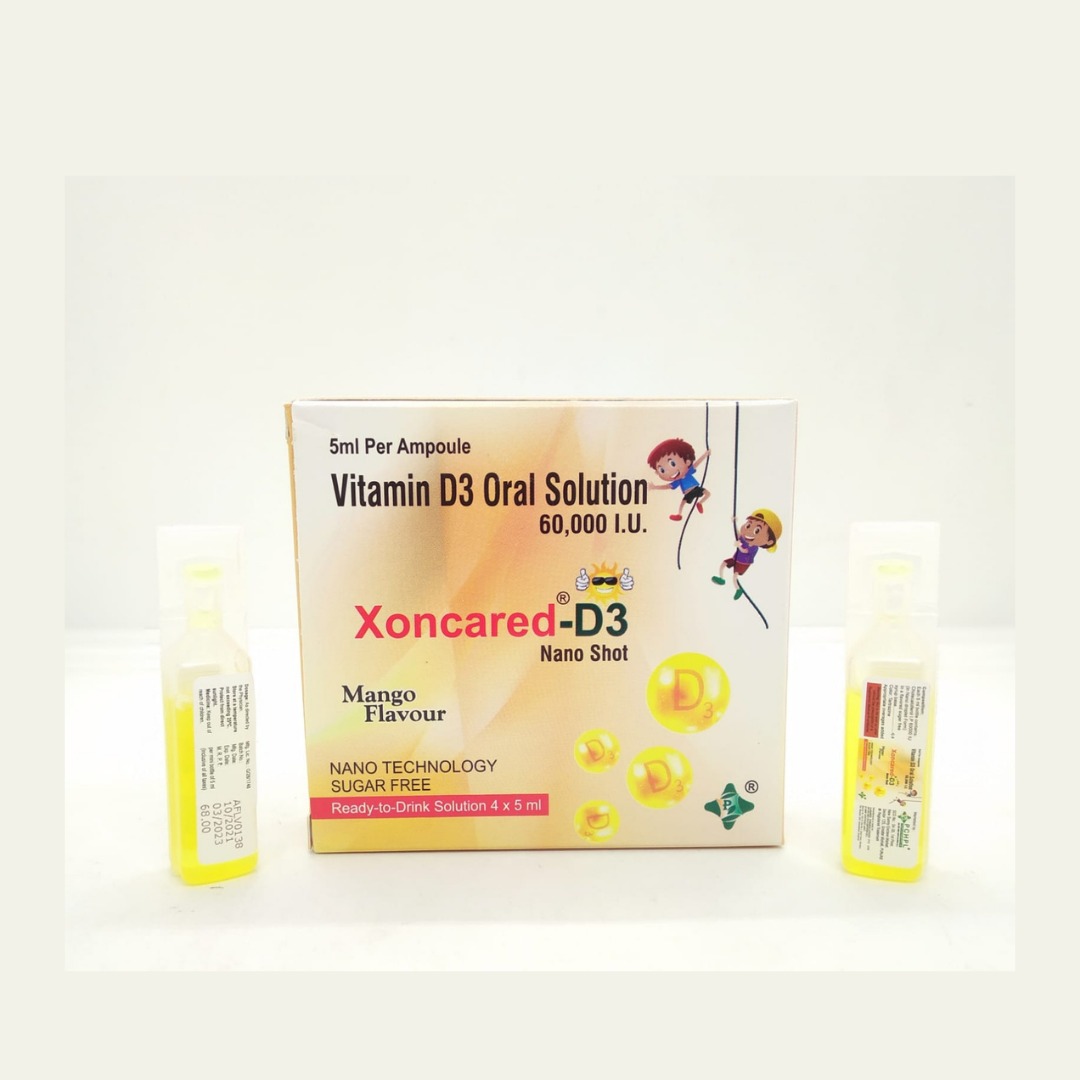 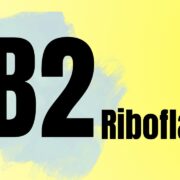 Water-soluble vitamin B2, sometimes called riboflavin, is naturally present in several foods. Like vitamin B1, the body cannot produce riboflavin also. Small amounts of it are stored in the liver after being absorbed into the small intestine during digestion. The body releases extra riboflavin in the urine after it has been passed through the bloodstream. This is the reason why foods rich in Vitamin Bs are recommended to be eaten daily. 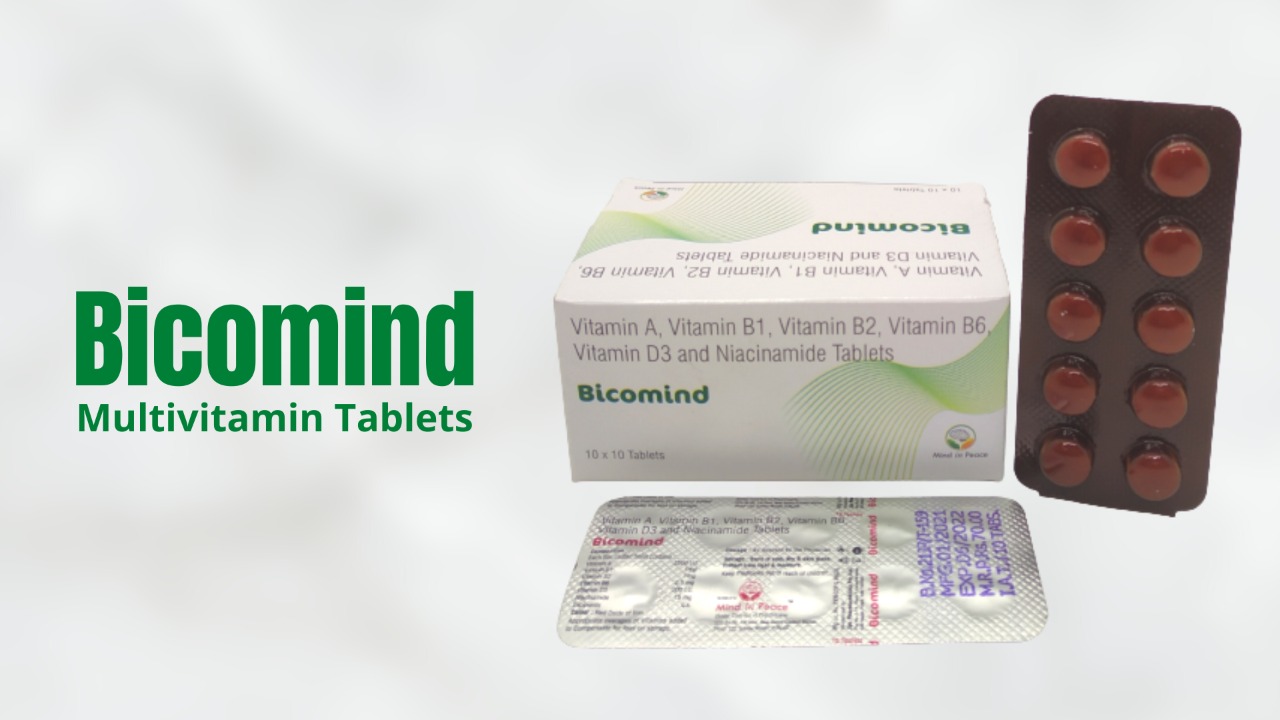 The B vitamins group helps the body produce sugar in the diet (carbohydrates). These vitamins, also called B-complex vitamins, support both protein and fat metabolism. To maintain healthy skin, hair, and eyes, B-Complex vitamins are needed. They also support the maintenance of the nervous system.

Additionally, the body needs riboflavin to convert vitamin B6 and folate into forms that may be utilised. The growth process and the creation of red blood cells both depend on it. Most healthy individuals who consume a diet that is well-balanced obtain adequate riboflavin. However, due to inadequate food, older persons and drinkers may be at risk for riboflavin deficiency. The following are signs of riboflavin deficiency:
• Fatigue
• Sluggish growth
• Digestion issues
• Around the mouth’s corners, there are cracks and sores.
• Magenta-colored tongue enlargement
• Fatigued Eyes
• Throat swelling and discomfort
• Light Sensitivity
Assists in the breakdown of proteins, lipids, and carbohydrates is vitamin B2. It is crucial for sustaining physical strength.
Adenosine triphosphate is produced from carbs with the aid of riboflavin (ATP). Food is converted into ATP by the human body, and ATP generates all the energy required by the body. For muscles to stay strong, compound ATP is necessary.
Vitamin B is necessary in addition to vitamin A for:
– Maintaining the digestive system’s mucous membranes.
– Keeping the liver healthy.
– Transforming tryptophan into the amino acid niacin.
– Iron and activate iron, folic acid, and the vitamins B1, B3, and B6 maintain the health of the Eyes, emotions, muscles, and skin.
– The adrenal glands produce hormones.
– Avoiding the emergence of cataract.
– Growth of children, particularly in regions where vitamin deficits are prevalent. 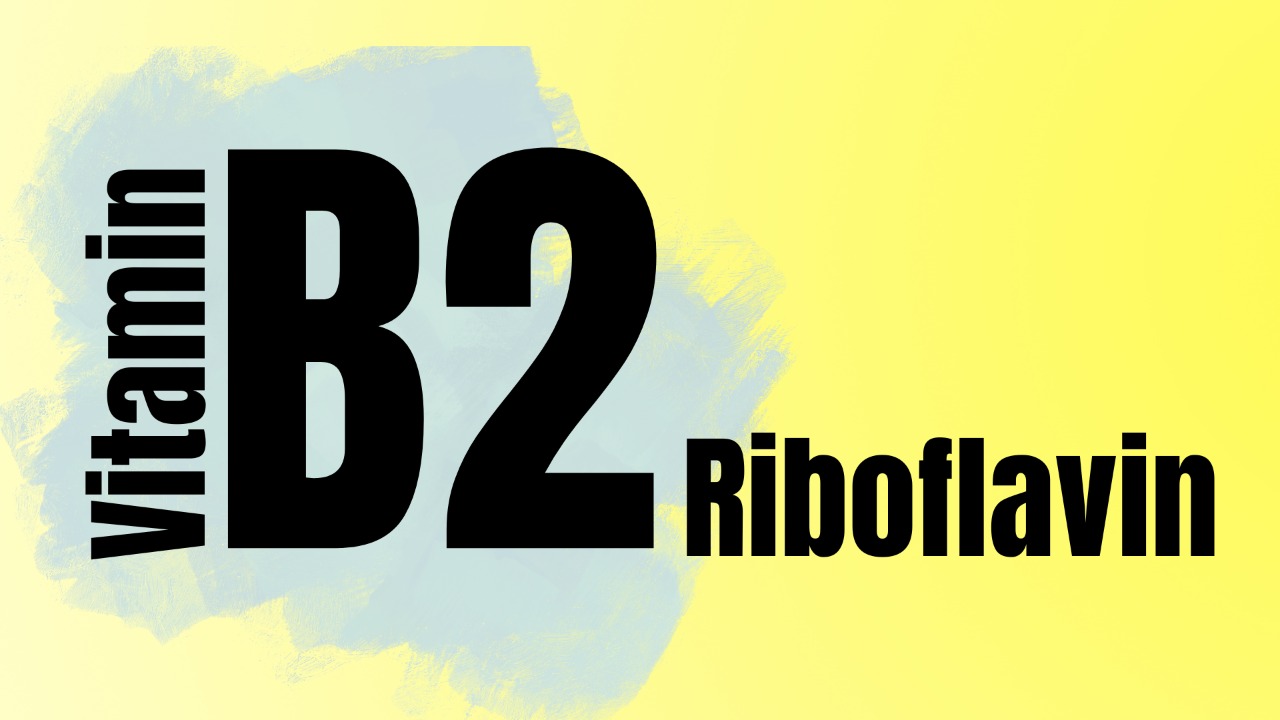 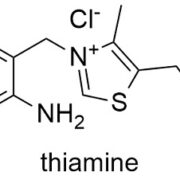 Thiamin is a micronutrient commonly known as vitamin B1. It is a water soluble Vitamin which cannot be produced in the body. Thiamin is crucial for healthy cell growth and function. Our liver can store very little thiamine, therefore, thiamin-rich meals must be eaten every day. A thiamin deficit in the body can result in a variety of issues.

Thiamine is a single chemical molecule, as opposed to folate and vitamin B6, which can be found in a number of vitamer-related chemical forms. Thiamine hydrochloride is the common name for this organosulfur compound. It exists as a white powder that is colourless when dissolved. It is soluble in water, methanol, and glycerol but nearly insoluble in less polar organic solvents. It degrades when exposed to heat. The most physiologically well-understood form of thiamine is thiamine pyrophosphate (TPP), sometimes known as thiamine diphosphate. TPP serves as a coenzyme in the metabolism of carbohydrates and amino acids.

Despite the fact that thiamin deficiency symptoms were first documented in ancient Chinese medical writings, they were not related to food until the late nineteenth century. It is a naturally occurring chemical that is also manufactured in large quantities for use as a supplement or medication. Among the foods that contain thiamine are whole grains, beans, some meats, and fish. Cereals and flours are frequently fortified with thiamine since grain milling removes a significant amount of the vitamin’s concentration. There are supplements and medications available to treat and prevent thiamine deficiency and the diseases it causes, such as beriberi and Wernicke encephalopathy. Two further usage are Leigh syndrome and maple syrup urine disease. Although they are frequently consumed orally, they can also be given
Thiamine deficiency generally manifests as fatigue, weight loss, irritability, and confusion. The well-known diseases caused by thiamine deficiency include Beriberi, Wernicke-Korsakoff syndrome, optic neuropathy, Leigh’s illness, African seasonal ataxia (sometimes called Nigerian seasonal ataxia), and central pontine myelinolysis. 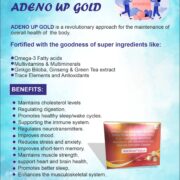 ADENO UP GOLD is a revolutionary approach for the maintenance of overall health of  the body.

DOSAGE:1 Capsule daily or as directed by the Physician.

Why do we need Multivitamins?

Our body uses various vitamins and minerals to perform different body functions effectively and it receives these nutrients from the food we eat. But not all foods provide adequate amounts of these nutrients and most of these nutrients are lost during the cooking process. So, in order to meet with the nutrient needs of the body, the doctors prescribe multi-nutrients and multi-minerals for individuals who are diagnosed with nutrient deficiencies.
Adeno Up Gold is Marketed by Psychocare Health Private Limited in India.